The Lodge, the Web, and the Hive

{Published in the Empire State Mason, Fall 2014, the first of several articles contributed as webmaster of NYMasons.Org.} Our world of technological wonder may sometimes seem at odds with Masonic values, ancient and timeless. But how we practice and give voice to Masonic Truth depends on the times and tools at hand, and the ears of the world around us. Understanding a timely need to modernize our communications in this ever-changing world, Grand Master William Thomas took no delay in setting things in motion. Deputy Grand Master Jeff Williamson shares this goal as head of the Communications Committee. He speaks widely that we should consider all the generations of Brothers in our Fraternity. This includes the use of paper, emails, websites, and social media. It is an unspoken charge of “no Mason left behind”. It also means being accessible in ways that are expected for upcoming generations of Masons, ways that did not exist a few short years ago. MW Thomas set forth a list of “Best Practices for Social Media”, the electronic newsletter “Hiram’s Highlights” came into being, and I was asked to develop a new Grand Lodge site. I was surprised and a bit intimidated. This wasn’t like other projects I’ve done over the last 15 years. It was for something both grand and dear to me, and it has proven a wondrous opportunity to both serve the Craft and meet Masons across the state. As a professional web developer, I do not believe in using technology for its own sake. Here is a chance to use digital tools for more noble and glorious purposes. What is the role of the Internet in communication between Grand Lodge, the districts, lodges, and concordant bodies? How does it brand Freemasonry to the uninitiated? How can it be used for Masonic education? These are questions we aspire to answer. Now that the new site is launched, calendars are being integrated, and documents and forms shared on the cloud, we are in full swing to ensure our communications are relevant to 21st Century demands. But it doesn’t end at Grand Lodge. Many districts and lodges have their own website; others do not. Some use calendars that can be combined to avoid local event conflicts. Many do not but could find it very useful once put in place. Some websites have little useful information, missing things as simple as contact information or a physical address. Some of them are abandoned, outdated, or unofficial, yet publicly representing the Craft for better or worse. To fix all this might be like herding cats. The Next Step The standing challenge for districts to each have their own website is now a working plan. The first step will be to inventory all official working district websites and link to them to and from the Grand Lodge website. The second step will be to provide the resources for all the remaining districts to have such a site. These sites will ideally be run by brothers within their respective districts, and training will be provided as necessary. The format made available is user-friendly enough for anyone with basic computer and word processing skills. 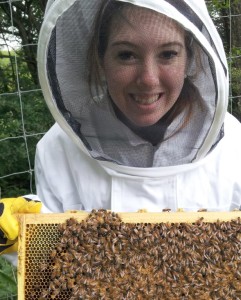 But this will not be micromanaged by anyone. This will not be herding cats. At the St. John’s Day weekend mass, RW Grand Chaplain Wainwright McKenzie spoke of the industriousness of the beehive. This caught my attention for two reasons. The first is that my daughter and I started keeping bees this year. The second is that it came to me one day that if a webmaster was an officer of the lodge, their symbol might be a hive under a quill. Yes, I am suggesting that for communication, we can work as a hive, but what does that mean? There is a saying in beekeeping that the beekeeper wants the bees to do what he wants, but they want to do what they want. Perhaps this is the challenge of balance in an institution such as ours, a harmony of leadership and individual conscience and action. In a hive, each bee may dance to tell the others where and how far away a resource is, such as water or forage. But each has their duty, moving over the course of their lifespan through the “chairs” of nurse, guard, forager. Their ritual is written in their DNA; their landmarks are the instincts of the survival of the hive. But I do not think the Grand Master is a queen bee, and we merely workers and drones. That doesn’t sound very Masonic. The role of leadership is perhaps more like the beekeeper. They provide the structure, support, and ever-watchful protection and care of the hive’s health. Our goal is not to put the web presence of New York State Freemasonry under one controlling team, nor dictate how the job gets done in the local quarries. The plan is to make it as easy as possible for us to better communicate and have our efforts be in the same direction. We must be on the same page. Over the upcoming months, we will be proposing and publishing a set of recommended best practices and common-sense standards for official lodge and district websites. An online repository is being developed for use by webmasters across the state. It will contain logos, QR codes, and other graphics, as well as commonly used forms and content. There is much more to come, but this is a start. It is no small task. It will take time. We intend not merely to lay stones over the next two years and start over yet again when the torch is passed, but, as RW Williamson puts it, “to build a great work of beauty”. Our trestle board is framed with efforts that we believe will not simply fix a problem or sustain us for today, but create a framework that is bigger than any webmaster or website, a work we can all share that endures for years to come. And that, I would suggest, is very Masonic.