{Published in the Empire State Mason, Winter 2014-2015, the second of several articles contributed as webmaster of NYMasons.Org.} 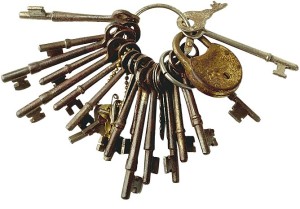 Who owns your lodge building? This seems like a simple question. But when asked a number of years ago, many lodges weren’t sure. Some turned out to be in the names of dead trustees from years past! Here’s another question: Who has a set of keys? Does anyone know for sure who has access? This can be difficult to manage with real property – and neglected for virtual matters. The Secretary has access to MORI and may be responsible for physical mailings, but who manages other communications? Who is in charge of the website? Do you even know if your lodge or district has one? In other words, who owns your online presence? Another way to communicate is a phone tree. More and more organizations are replacing (or supplementing) this with automated “robo-calls” through an online service, such as PhoneVite.Com. Under which officer do such duties fall? There is a large enough divide in digital literacy that the secretary may delegate such things, if they are given the task at all. One lodge’s Master set up an account (in their name), then the next master created a new account (in their own name). Fortunately, the Master after him showed forethought and created a lodge-owned account that could be passed on as necessary. It’s even worse with websites. It often falls to a brother who simply knows more than the next guy about “computers”. A lot of work and effort may be put into it. But then they aren’t given the information they need to keep it current, or they become too busy. Or they move out of state. Or leave the Craft. Or travel to the Celestial Lodge. Maybe someone took the initiative to make a site for their lodge but it was never officially used, and an approved site was built later, making the first a “clandestine” site still in public view, with out-of-date information. The lights were never turned off, creating confusion. How many orphan or clandestine sites are out there in your name? Like no current member having their name on a lodge bank account, the domain name (the ‘dot-com’ or ‘dot-org’) might be in the name of someone you cannot reach (or will not cooperate). It can be fixed, but it’s a tedious process to recover such an “asset”. And getting a new name leaves an old, uncontrolled one out there. Or maybe you have control over your “name” and need to take control of the site itself. Who is paying for hosting, and will it lapse? Who has a username and password to make future or emergency changes? In other words, who has the keys? The solution to cure and prevent all these problems is to treat a website, common email account, cloud service for storing documents, etc., as “digital assets” of the lodge. The webmaster doesn’t own the website. Or do they? This needs to be settled. What is a “webmaster” anyway? It used to mean one person who both builds and maintains a website. That doesn’t have to be the same person any more, since new sites can be managed by anyone with word processing skills. Now you can have a site built and supported by a company or technical person, while almost anyone within the lodge takes responsibility for its content and use. (And a lot can be automated, so state, district, and local information doesn’t have to be kept separately by everyone.) Think of a “webmaster” as a “digital trustee” – someone who has the keys, responsible for control of the site, online files and accounts. Just like regular trustees, there should be more than one. Even if there’s only one brother with skills and desire to do the work, there should be a clear plan of necessary information and access by at least one other person in case the first becomes unavailable. Remember, in Masonry, nobody owns an office. That principle is one of our great contributions to Western Democracy. When a brother leaves a chair, the work must continue. But the webmaster is neither officially elected nor appointed. They just sort of happen. They are a fifth wheel, often kept out of the loop when needed the most. And when they come and go, we often are left to start from scratch and can’t even clean up what already exists. I suggest we look at this role carefully, differently. Official or not, it is a responsibility that is not at all superfluous or peripheral to the efficiency and survival of the craft. Our “digital trustees” need to be empowered and accountable. They deserve recognition and must accept direction. It is one of my goals as a member of the Communications Committee to bring this grey area into the light. Under the direction of the DGM, RW Williamson, and with help from many brothers throughout the state, we are now actively working to catalog district sites and their webmasters. And instead of trying to establish top-down control, the plan is to guide and give resources where they are welcome. In fact, the way I hope to achieve this is by collaborating with webmasters across the state, to develop standards and best practices together. If there is interest, we may even form an “internet Square Club” where webmasters and other interested masons can meet (online and off) for fellowship, support, and sharing their expertise. There is no need to pull everyone kicking and screaming into today’s world. All we need are enough craftsmen willing to establish, digitally, the beauty and strength the craft requires here and now, enduring into the future. If you are interested in being somewhere in the roll call, contact me.